Today, Preston Plucknett is merely a district in Yeovil. However,

the village of Preston is mentioned in the Domesday Book of 1086. ‘Plucknett’ was added to the name later, and is derived from the name of Alan de Plugenet, who was Lord of the Manor in the 13th Century.

The oldest part of St James’ church was built about 1420 as a simple chapel consisting of the nave and chancel. The transepts and the tower, which is 20m (60 ft) high and has six bells, were added later that century.

The building was restored and partially rebuilt in the 1860s. Then, during the 1950s, the vestry was built by the vicar and some of the congregation.

In 1979, an annexe was added, with kitchen, toilets and a glass door that now provides the entrance from Preston Road.

Throughout all those years, St James’ was a daughter church of St John’s, the parish church of Yeovil. In 1988 it was designated for the first time as an independent parish church for northwest Yeovil.

In 1998, a financial step of faith was taken to have a new Church 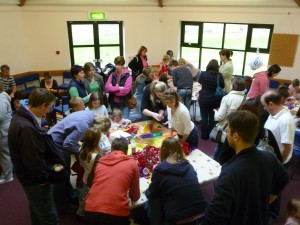 Room built onto the annexe. This was opened in 2001 and is now the scene of many of the church’s activities.

St James’ continues to grow to match its developing parish and increasing congregation, and we have recently undertaken a redevelopment project for 2020. This has expanded the seating in the church, introduced underfloor heating, and created a more flexible worship and meeting space in the main building.

Who was St James?

Like many churches, ours is named after one of the disciples – the band of twelve ‘ordinary people’ who travelled around with Jesus.

James and his brother John came from Galilee, and were possibly cousins of Jesus. Their family was relatively well off and the brothers worked on their father Zebedee’s fishing boat. However, when Jesus saw them preparing the boat, he called to them to follow him and instead become ‘fishers of men’.

James and John were soon nicknamed ‘The Sons of Thunder’ by Jesus because of their fiery temper and impetuosity but, together with Peter, they were the ones closest to Jesus.

After the death and resurrection of Jesus, James became one of the leaders of the Jewish Christian community in Jerusalem, which expanded rapidly and was soon viewed by the authorities as a threat. Persecution followed, and the first victim was James, who was beheaded by the Jewish king, Herod Agrippa I, in 44AD.

There is an unproven tradition maintaining that James visited Spain before returning to Jerusalem to meet his death, and that his body was then returned to Spain and buried in the northern town of Compostela.

Because of this tradition, Compostela became one of the most famous places of pilgrimage during the Middle Ages, and James was venerated as the patron saint of pilgrims. That is why our stained-glass window shows him holding a scallop shell, the badge worn by mediaeval pilgrims to identify themselves, and thus ensure safe passage through the dangerous country on their journey.

Thank you for your upload